Often times, I have a satisfied client who has a Star bull(s) to sell after producing a number of daughters as herd replacements. Usually they purchase another Star bull that is less related to continue to upgrade their herd. In turn, I assist them by advertising their bull(s) at this website.

Bob and Ann Demerath have a Star bull for sale. LR 18 was born in 2014. His sire was LR Grey Bull and his dam (LR Sherry) was one of my best cows. She lived to be 15. Attached is some information on the bull (Bill of Sale-CSR). They are asking only $1,800. Bob said that they have no issues with the bull. Sounds like they have too many bulls. Their cattle are part-owned by Burke Teichert. 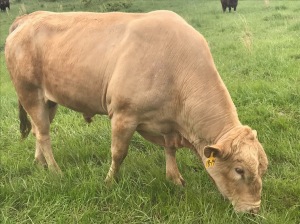 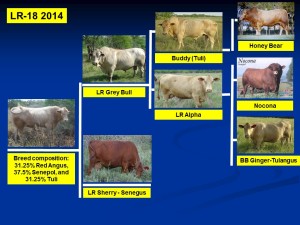 Chuck Grimes from Hennessey, OK, has two fine Star bulls for sale. They are 6 years old. I sold them as weaned bull calves. Chuck has mostly bred them to Longhorn cows. He has been very pleased with them. Hundreds of calves have been sired by these bulls and not a single pull! Chuck says too that both bulls are dog gentle. They have many years of breeding left in them. They were sired by PCC R2R Simon. I bought him in 2012 mostly for his low birth weight genetics, smaller frame size and being from a low-input line of Red Angus. Simon was born in central Texas. (Bull 10-2014 pedigree)(Bull 13-2014 pedigree).

Mark Beall has been a satisfied breeder of Star cattle for several years now. He is developing a herd of adaptable, low-input cattle. Here is his message: Steven: Earlier this year we had to reduce our herd due to drought; and we need to sell these bulls: LR 19 – 5 years old (Beall-Bull 19 Info) and LR 22 – 3 years old (Beall-Bull 22 Info). Update: July 8, 2020 -These bulls are both sold.

The 2019 crop of Star calves showed strong African genetic influence and a high degree of uniformity that reflected several generations of selective breeding for high fertility and production under hot tropical conditions. Star cows have been Texas born on Lukefahr Ranch and have been bred with a high degree of African genetics. Many ranchers have operations in regions that for several months of the year become tropical. Star cattle have performed well in Arkansas, Missouri, New Mexico, Oklahoma, and South Carolina, and they truly shine when the breeding season is in the summer. They have also been reported to do well in fescue country. When purchasing a bull know that they drive the genetics of the herd! Bull calves are sold by private treaty. With a deposit, a bull(s) is held until weaning in late November. Purchasing young bulls saves money for the buyer.

The following table provides information bull’s  parentage, trait scores and weights, and EPDs. The 2019 Spring genetic evaluation was previously computed at Lukefahr Ranch. The EPDs for birth wt were based on the calf’s actual birth weight record as well as records from relatives. Interim EPDs for weaning wt, milk, and total maternal were based on records from relatives and the genetic correlation between birth and weaning weights. Later in the fall when weights at weaning age are recorded, all EPDs will be recomputed in the Fall genetic evaluation. The following table provides detailed information on these bulls: 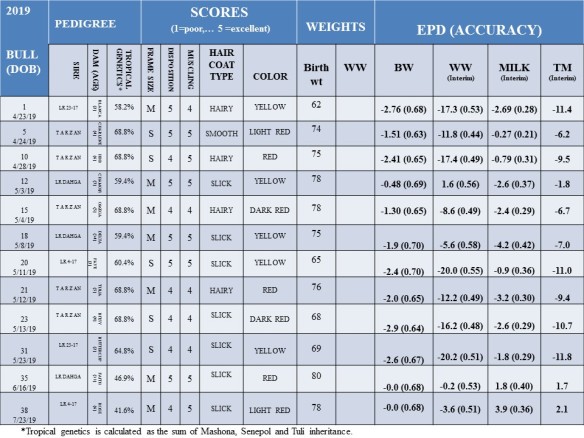 Next is a photo gallery of the four sires of the 2019 calf crop. Tarzan – a Mashona purebred – is dark red. This bull adds even more African genetic influence and vigor to the Star composite herd. Several ranchers who are familiar with the Mashona breed and who have seen Tarzan have made the comment that “He is the best Mashona bull in the U.S.”. Star herd sires LR 23 (LR Dahga) and LR 4 (LR Emery) are both homozygous for the slick gene. As such, all of their calves have been slick.  LR 23 was heterozygous for the slick gene and about half of his calves have been slick or hairy. For the 2019 calf crop, the combined composition of heat-tolerant Senepol, Tuli, and Mashona breeds is, on average, 63.3% (if Mashona-sired the range is from 64.1 to 89.1%). Most of the Mashona-sired calves have over 75% African genetics with a maximum load of hybrid vigor. In addition, most of this year’s calves show extensive muscle development, even more than that commonly found in purebreds. I attribute this level of expression to breed complementation – due to the combination of the best genes for extensive muscling from the Senepol and Tuli (and now Mashona) breeds. This observation was made on LR Dahga as young calf.

Purebred Mashona. Dark red in color and smooth-coated (but not as short as slick cattle).

Herd sire that is highly heat resistant and fertile, while attracting few flies in the summer.

A homozygous bull for the slick gene and out of a 2 year-old dam. Like his parents, he maintained excellent body condition.

This was a short-framed and slick Star bull that was thickly-muscled and deep-gutted and was very gentle.

A set of photos of the dams appears below. Each of these cows was born on Lukefahr ranch and has calved every year since the age of two years and without any pampering. For many years, the cattle herd has neither been dewormed nor treated for external parasites. In 2018 the total feed cost per cow was only about $10.00.

For  2019, the average birth weight of all the calves was 68.7 pounds. In recent years, Star cattle have become shorter-framed, lighter at birth and at maturity (improving cow efficiency), deeper bodied and more muscular, as well as being slick coated and lighter colored. In 2019, most bull calves were born slick- or smooth-coated while only a few being hairy. The hairy bulls will do just fine above the Texas border where freezing winter storms are common. They will shed their hairy coats by early spring and then express the many genes that they possess for heat tolerance and adaptation to drought conditions, which they will transmit to their offspring. Breeders from AR, MO, NC, NM, OK, and WY who have purchased slick Star bulls have confidently claimed that there are no problems with the slick cattle during winter. Slick cattle typically produce a short hairy coat in the winter, but this coat is quickly shed in early spring as shown in the following photo taken in winter of a slick Star bull in Arkansas.

Annually, DNA tests performed by GeneSeek reveal which calves are homozygous (two genes) versus heterozygous (one gene) for the slick gene. This means that later as parents those bulls that are homozygous will breed true for this trait – all of their offspring will be slick and will express added heat tolerance. Bulls that are heterozygous (one gene) are expected to produce the slick trait in half of their calves. Over 10 years of data from calves born on Lukefahr Ranch were recently analyzed, and revealed that slick compared to hairy calves are, on average, nearly 30 pounds heavier at weaning age (205-day adjusted). This is a dramatic effect of only one very major gene!

Lukefahr Ranch sells genetically heat-tolerant and drought-adapted cattle by offering grass developed young bulls on a first-come, first-served basis. Over several generations, an easy-care cattle herd has been developed. For ranchers that have been affected by serious drought, this is an excellent opportunity for you to invest in a young bull or bulls from this STAR composite herd that can help you rebuild your herds with the right, easy-care genetics for a low-input system by working closer with Nature. Most bulls are born in May and are ready to breed by the next summer (mid-July through August) at about 14-1/2 to 15 months of age. Lukefahr Ranch and a growing number of clients have been using such young bulls (either in single-sire pastures or as a cohort of young bulls in multi-sire pastures) for several years now with excellent pregnancy results, which mirror the high fertility test scores via Breeding Soundness Evaluation conducted prior to bull turn-out. The photo below exemplifies the high libido level of 7 month-old bulls.

STAR cattle have low input or maintenance requirements (for the past several years, total annual costs per cow have been under or near $300) even during years of exceptional drought. From 2013 through 2018, total feed costs per cow were under $20. Bull calves offered for sale are from cows that consume during winter mostly stockpiled grass from the fall (without energy or protein supplements) and conceive during their first heat cycle when exposed to a bull between mid-July through August during high heat index conditions.

In past years, our ranch has had good success in selling young, backgrounded bull calves to area ranchers in several states. Because of the high demand, it has not been necessary to retain these calves to breeding age. (Purchasing a young bull also saves money.) A STAR bull in one generation will produce daughters with genetics for unsurpassed heat tolerance and drought adaptation. This is a wiser investment than buying STAR heifers. Previous customers (see Bull Owner Success Stories from the menu area) have been especially pleased when using STAR composite bulls (in the form of corrective matings) on Beefmaster, Brangus and Santa Gertrudis purebred and crossbred type cows. The female offspring develop into mature cows with considerably smaller frame and moderate body size, and are not excessive in flesh, bone or milk production in addition to being heat tolerant and drought adapted.

Upon request, each bull is provided with a brief description, a photo, pedigree, and trait EPDs and accuracy values. The genetic evaluations are performed by geneticist and ranch owner, Steven Lukefahr. Trait EPDs are computed for birth and weaning weights, milk, and total maternal. Records are entirely from STAR cattle, as well as pedigree data that trace back to related purebred foundation ancestors. EPD values are all relative to animals with trait records in this unique population. However, EPDs should be used with caution. I would prefer retaining and selling calves with zero or even negative EPDs as such values would likely be associated with lighter calves and smaller and more efficient cows. Of course, negative birth weight EPDs are important if a bull is to be mated to heifers.

In promoting bulls, a photo and information on the bull calf’s dam are also provided. The cows all have great dispositions in addition to good fleshing ability, slick hair coats, high level of fly resistance, and early puberty (usually at 6-7 months of age). The bull calves have early sex drive or libido – as is evident in the above banner photo when these calves were only about 5 months old. Early age at puberty is a trait trademark of STAR cattle which is a show of high fertility and adaptation to the harsh environment without any pampering.

Feel free to contact me by email (slukefahr@gmail.com) or by cell phone (361-219-0382) if you have any questions or if you request additional information on these bulls. This year I have already sold my surplus heifer calves for breeding. I do not have any heifers or cows for sale at this time. Contact me to schedule a personal tour!

Billy Griffin from Bandera, TX, is the proud owner of these two Star bulls that are two years old. Billy has developed a herd of Star composite-bred cattle that are adaptable on a low-input production system. A number of Star bulls as well as heifers have been purchased since 2014. From the photos below, the light-colored bull is 35.1% Red Angus, 45.3% Senepol, 18.8% Tuli and 0.8% other breeds. His dam (LR Beth) is 17 years-old and has produced a calf every year since she was a two year-old. The red bull is Mashona-sired by Tarzan. His breed composition is 50.0% Mashona, 31.3% Red Angus, 12.5% Senepol, 6.3% Tuli. His maternal grand sire is Bandito Tres (Red Angus) and his maternal grand dam’s sire was Nocona (Senepol). His dam (LR Faith) is now 12 years old. These bulls are both slick, short-framed, deep-gutted and have good muscle development, which exemplify well the evolving type of Star cattle.